(3/4) Susan Green: A Parent’s Perspective of the Clinical Trial Process

As we celebrate our milestone 30th year as a small charity, we are pleased to be joined by foundational figure Susan Green who developed Niemann-Pick UK back in 1991 along with her husband Jim. This article, originally shared in 2009, gives insight into their family life and motivation (it will be serialised into four parts due to length, and shared throughout the month – this is part 3). 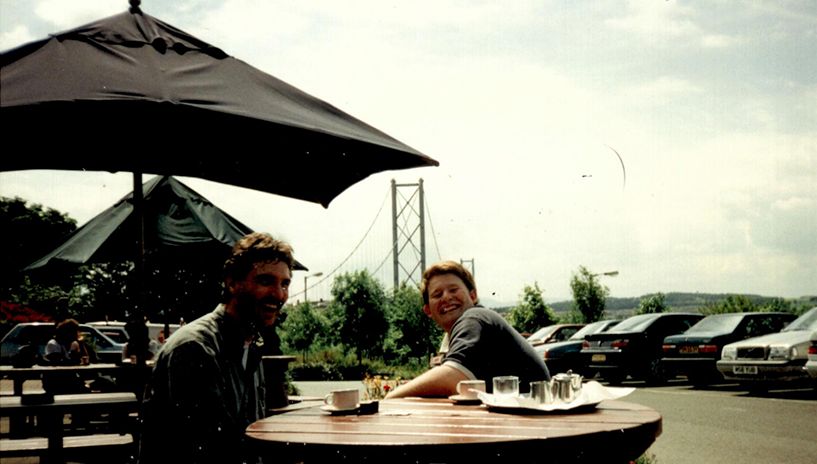 In June 1997 Dr Gene Carstea came to our conference with the exciting news that the NPC1 gene had been found on chromosome 18! There was celebration all round; he discovery of the NPC1 gene, and later an NPC2 gene, enabled the development of genetic tests for pre-natal diagnosis and carrier testing. The genes also revealed a new way that cells handle cholesterol. They provided an understanding of a previously undefined pathway of cholesterol metabolism. This orphan disease might someday shed light on more common illnesses involving cholesterol, including heart disease, stroke and Alzheimer’s disease. We were all so sure that a treatment or cure was just around the corner!

Roy continued to attend NIH every year and enjoyed meeting every one again while they collected samples, and information. His particular favourite was Jackie; she let him go to sleep when he was having his EEG! Roy also enjoyed the food! 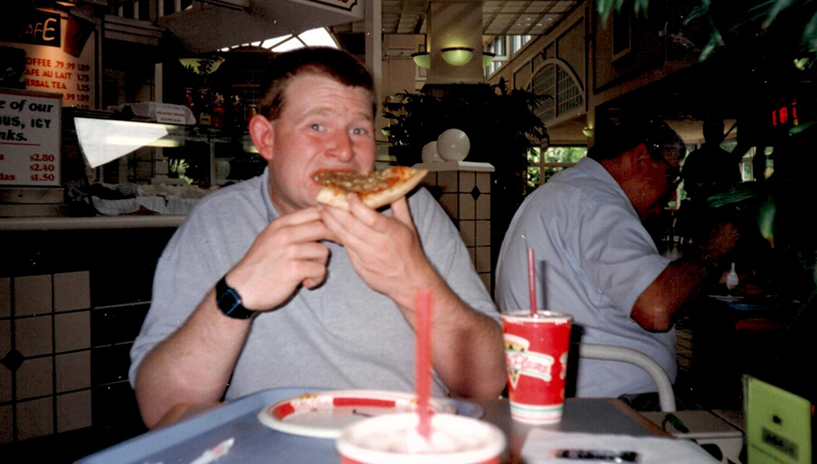 Roy was always keen to be involved in research. He had watched the effect that this disease had on his brother and he was determined to help. He said, “Mum, if the doctors are working so hard trying to find some answers to this disease then we need to do our bit to help”. So we continued to attend NIH every year and enjoyed meeting every one again while they did their tests and collected samples, and information. We were always made to feel welcome and the clinicians and researchers went out of their way to answer all of our questions. We were able to spend some time in the laboratories learning about the research and Roy was amazed to be able to look at his own cells through the microscope. 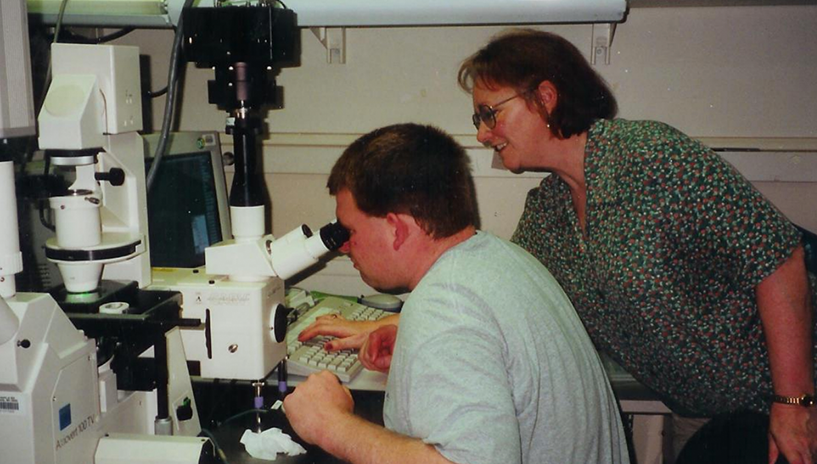 Roy and I usually managed to time our visits to NIH with attendance at the NNPDF family conferences. Roy would sit in on most of the presentations and was often found in conversation with researchers. Here he in the picture below with Dr Steve Sturley “the yeast man”.

Meanwhile the clinical research was moving ahead here in the UK. We now had a large group of Niemann-Pick patients, being seen regularly by one doctor!  The NPDG(UK) [now Niemann-Pick UK] contracted with the hospital Trust in Manchester to employ a Clinical Nurse Specialist to support patients and gather clinical information. Although she was employed by the hospital Trust, her salary was paid for by the charity. 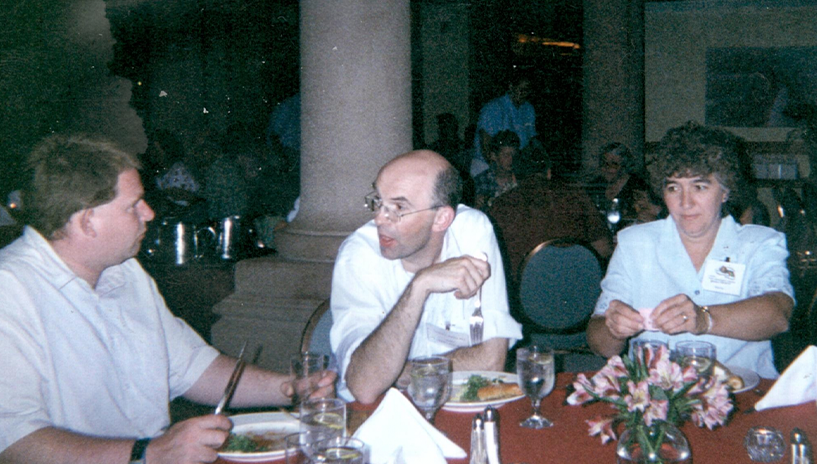 All this galivanting around can be tiring! But whilst this went on the clinical research was moving ahead in the UK. We had the largest group of Niemann‐Pick patients being seen regularly by one doctor in the world! We had the first clinical trial starting for Miglustat, or OGT 918 as it was known then. It was exciting! It was Dr Fran Platt that I first heard talking about sugar A, at a Climb conference. Its real name nbutyldeoxynojirimycin was a bit too long! Then Dr Steve Walkley also gave a presentation on his work with N‐BDNJ at an NNPDF conference. I asked him if he had met Fran and he said no, he had only read her research papers. So we invited them both to the next NPDG(UK) family conference. Theirs proved to be a very productive partnership. 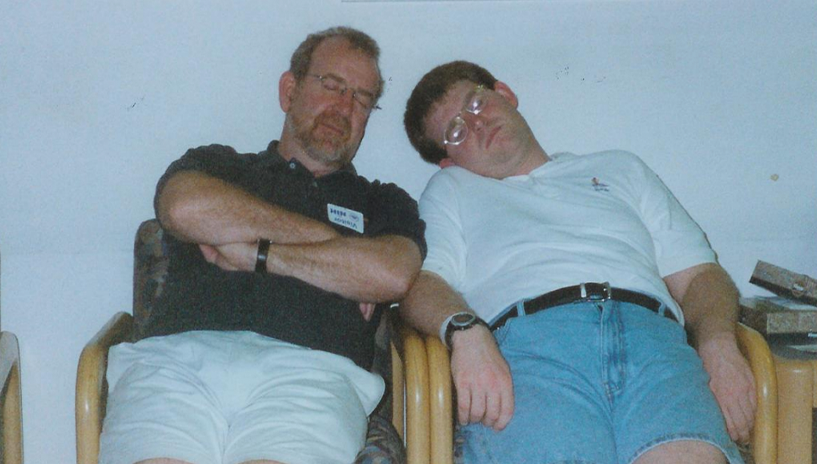 We had the first ever clinical trial starting for a possible therapy for NPC. Miglustat, or Zavesca as it is now known, was a small molecule drug which it was hoped would slow down the progression of the disease. It was exciting! Roy was one of the first patients to be screened for enrolment in the trial in the UK. It was great to be involved in something for which we had waited so long.

On the second screening visit he met the speech therapists who did the swallowing assessment. He enjoyed that bit because he got to eat again! 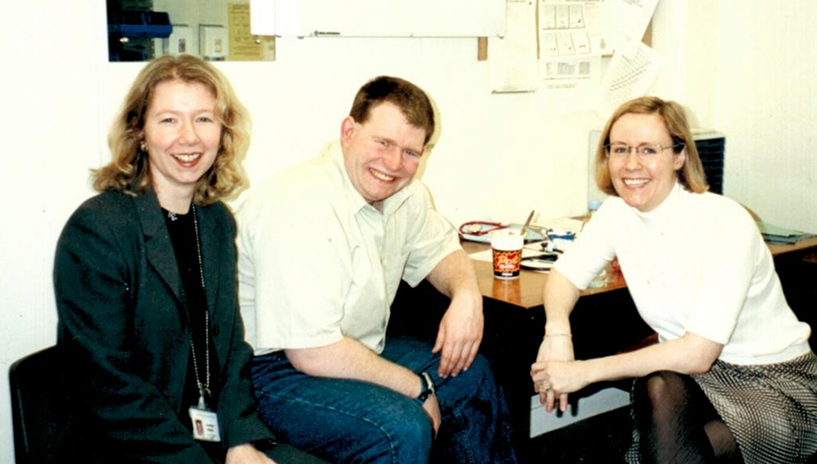 Then there was the nerve conduction test – he definitely didn’t like that! Next, the nutritionist, Roy always likes to talk about food! We then went to Sheffield by taxi to do the eye movement test. Disaster! Roy couldn’t do it. He just kept falling asleep. It meant that he would not be able to be on the trial. Everyone was devastated! Except Roy who just wanted to sleep. There were even some tears and I found myself comforting them. I was horrified, if Roy couldn’t do the test, how would the little ones manage? This could screw up all of the study! People kept apologising that Roy would not be able to take part and all I could say was, “that’s OK, the important thing is that the trial goes ahead”…

The journey home was awful. I desperately wanted to talk to Jim but I couldn’t because Roy was there. I didn’t want to upset him although he seemed to have forgotten all about it – dementia can be a blessing at times! We were all bitterly disappointed but resigned to the fact that Roy would not participate.

This article is part 3 of 4: Susan Green’s story will be continued in our next blog update…