Niemann-Pick diseases are acquired through autosomal recessive inheritance, which means that the affected individual inherits two faulty (mutated) genes, one from each parent. If an individual has a single copy of the mutated gene, they are known as a carrier, and it will have no noticeable effect on their everyday lives and health.

The child may inherit identical mutations from each parent (referred to as homozygous), which can sometimes arise through intermarriage, although this may not be obvious over many generations. In other instances the parental mutations may be different and is referred to as heterozygous. 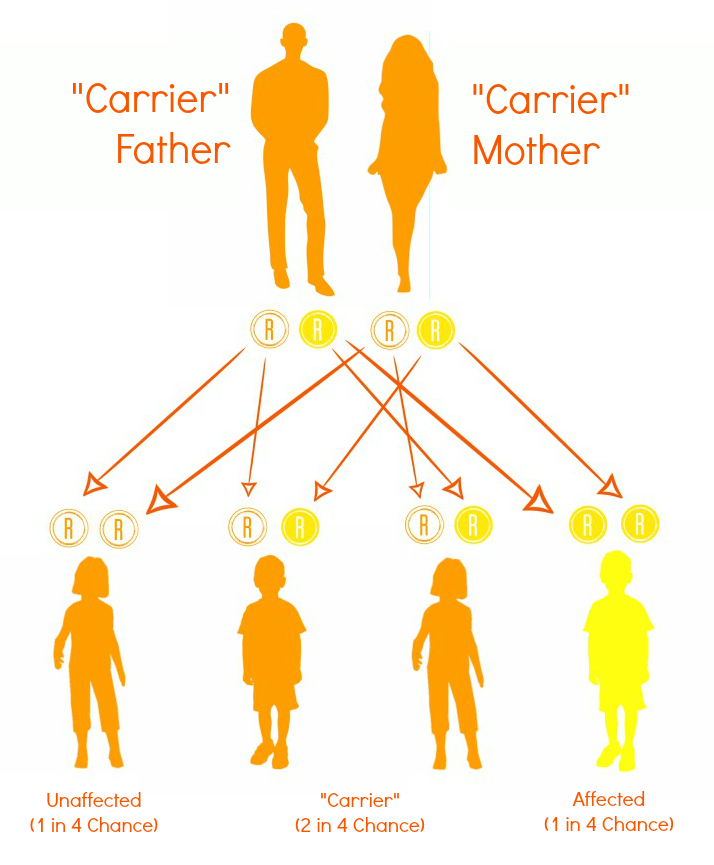 In every pregnancy of a couple who each carry a copy of the faulty Niemann-Pick gene:

Genetic counselling is recommended for all couples in which both partners are known to be carriers, or if one partner is a known carrier and the other’s status is uncertain.

Genetic testing (or screening) is a type of medical test that aims to identify changes in chromosomes, genes or proteins. The results of these tests can confirm or rule out a suspected genetic condition (such as Niemann-Pick disease), or help determine a person’s chance of developing or passing on a genetic disorder.

Genetic testing usually involves having a small sample of your blood or tissue taken, as this sample will contain cells which hold your DNA. Your blood can then be tested to find out whether you are carrying a particular mutation, and are consequently at risk of developing a particular genetic condition. More than 1,000 genetic tests are currently used, and more are being developed each year.

Dr. Michael Hughes from UCL explains gene therapy, and explores what this may mean for the NPUK community and broader Niemann-Pick family in this short explainer video.

The following tests may be conducted for prenatal diagnosis:

Carrier testing is conducted to determine if a person is a carrier for a specific autosomal recessive disease, such as Niemann-Pick disease. This kind of testing is primarily used by couples who are considering becoming pregnant to determine the risks of their child inheriting a genetic disorder.

For the general population, carrier testing for Niemann-Pick disease is not yet available.

Press Release: Xenpozyme® (olipudase alfa) approved by European Commission as first and only treatment for ASMD