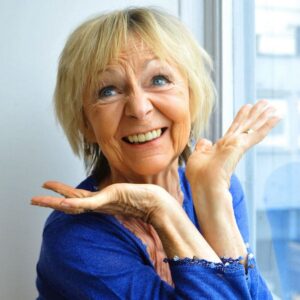 ampaign, Invisible Interviews. Sheila has starred in many amazing television shows such as Psychoville, Benidorm and Doctor Who, as well as being a star of screen in acclaimed films including Brazil, and stage, in productions such as Othello! So, it’s safe to say we were over the moon when she wanted to get involved in our campaign…

Early in November, our Communications and Campaigns Manager John Lee Taggart went down to London to record with Sheila. Although John was a little apprehensive to meet such a big name, she soon put him at ease and got behind the project. Sheila was clearly moved by the stories from our community and really seemed to understand the message we are trying to share, that not all that you see is everything that’s there. We are so pleased with the recordings, Sheila provides gravity and warmth to the narration, adding a little context to each interview as well as ways to support our small charity in the future. We also hear she has a fantastic biscuit collection…what’s not to love?

We want to say a huge thank you to Sheila for kindly donating her time and waiving the expected fee, but also to Sîan Fuller from the Independent Talent Group for helping to make the arrangements for the meeting.

NPUK is so thrilled to share Invisible Interviews with our community! You can watch the first interview with Graham Kirk, which features narration from Sheila here. Please get behind our latest campaign, by sharing this interview, and our future posts, with others – as always, YOUR support is what makes the greatest impact with such campaigns. Thank you!